Between 1949 and 1974, a province-wide BCG vaccination program offering free but non-mandatory vaccination for neonates, schoolchildren up to 11th grade, and other persons at risk of tuberculosis was led by Dr. Armand Frappier. Prior to vaccination, all subjects except newborns were subjected to a tuberculin skin test to identify prior infection with Mycobacterium tuberculosis or prior vaccination with BCG.

All pre-vaccination reactivity tests and vaccinations with BCG carried out were recorded on vaccination cards and sent to a central archive. The BCG Vaccination Registry, still kept at Institut national de la recherche scientifique (INRS)-Institut Armand-Frappier in Laval (QC), comprises some 4 million entries from 1926 to 1993 which includes the period of the vaccination program from 1949 to 1974. The information consists of the names of the individual, sex, father’s name (mother’s name in some cases), birth date, year of prior vaccination, pre-vaccination reactivity test (type, date, and reaction in mm), current vaccination (type, date), institution of vaccine delivery.

Computerization of the registry, funded by a Canada Foundation for Innovation infrastructure grant (PI: M.C. Rousseau, Leaders Opportunity Fund), was completed in 2010. The computerized registry allows now the research team to conduct vast population-based studies on the intended and unintended effects of this vaccine. 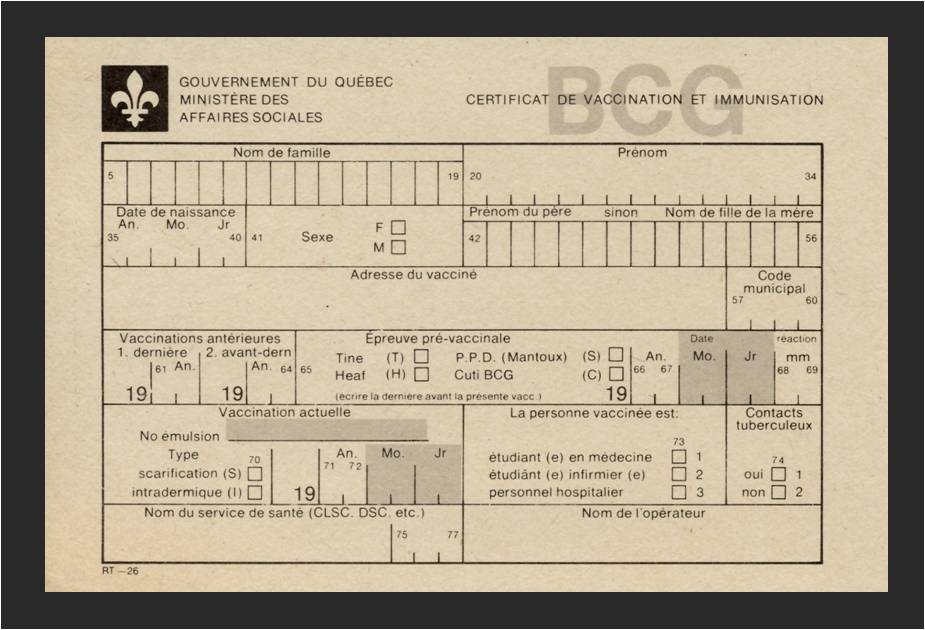 An example of vaccination card

The story of the BCG Vaccination Registry and the related research projects on Internet :